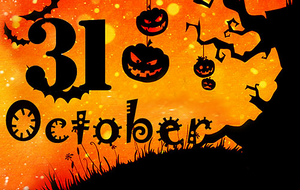 Long ago, people believed that evil spirits stole the sun at the end of summer. These spirits hid the sun during winter, making the days short and the nights long. People dreaded this dark and dreary time of year.

The worst night of all was October 31.

The Celts, in Britain and France, held a festival called Samhain (sow-whin) on October 31. During Samhain devils, witches, and goblins roamed the countryside stealing animals, overturning carts, and playing tricks.

The Celts burned bonfires to frighten away these terrible spirits. People also wore costumes of animal skins and heads to hide themselves.

In later years Samhain was combined with the Roman festival Faralia, which honored and welcomed the spirits. Then Christians began to celebrate All Saints' Day on November 1. They did this to make people stop celebrating Samhain. The evening before November 1 was called Hallow or Holy Evening. Over the years, it changed to Hallows Evening, then Hallow E'en, and now Halloween. 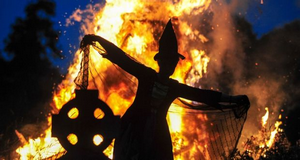 The word bonfire comes from bone and fire. Animal bones were thrown into the fires to keep evil spirits away. Halloween was also called Nutcrack Night Snap Apple Night in England.

Many Japanese honor their ancestors during Bon, the Festival of the Dead.

This celebration is held from August 13-15.

In India, camel bones are buried under the door to keep ghosts out.

In Germany, a nightmare is called a "goblin squeeze."

The Hopi Indians hold a festival for their dead in June, on the longest day of the year. This is when they believe the sun is as high as it can go.

In Mexico, toys are put out for children who have died, and bakers sell ”Dead Men’s Bread” shaped like skulls.

In France on Halloween children ask for flowers to put on graves in cemeteries.

The word sends shivers up some folks’ spines. Today we think of ghosts as pale, moaning, unhappy spirits haunting on Halloween night. But this has not always been so.

Many years ago some people believed ghosts were the spirits of their dead relatives who came home to visit once a year, on Halloween. Huge fires were kept burning on hilltops to guide these friendly ghosts home. The ghosts were welcomed with feasts of nuts, apples, cakes, bread, and meat.

But people thought if the ghosts did not get enough treats, they would become angry. They would then play terrible tricks, like stealing children or killing cows and horses. A ghost who haunts by making noises or moving objects is known as a poltergeist (pole-ter-guyst).They move chairs and beds. They rattle dishes or make pictures fall off walls. Poltergeists haunt any time they want, not only on Halloween. 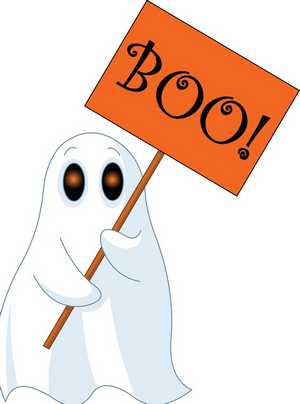 Children and animals are more likely to “see” a ghost.

If a candle flame burns blue, it means a ghost is in the house.

If a candle flame suddenly goes out with no breeze, it’s a sure sign that ghosts are present.

Ghosts don’t have shadows and leave no footprints.

If you hang a mirror on your door, ghosts will stay away.

If you throw a key at a ghost, the ghost will disappear.

To keep ghosts away, you should wear red or carry a bright light.

If you turn your pocket inside out, ghosts will be scared of you. 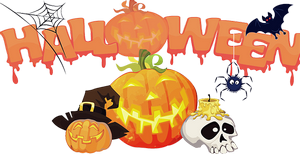 Halloween means “holy” (hallow) “evening” (een). This is the evening before the Christian holy day of All Saints Day. On All Saints Day, Christians remember the  Saints but Halloween is even older than Christianity.

Before Christianity, people in Europe believed that on October 31 ghosts of dead people came back. To scare the ghosts, people dressed like devils and were very noisy. They also made big fires to keep the ghosts away. Later, people did not believe in ghosts, but they kept the day of Halloween for fun.

Immigrants came from Europe to America and brought with them the  custom of Halloween. Halloween has some strange symbols. One symbol is the  jack-o’-lantern in the window. The jack-o’-lantern is to scare the ghosts.

People cut the pumpkin, throw away all of the inside, and cut a face in it.

Then they put a candle inside of it.

Today, in the United States, Halloween is very popular with the children.

They wear masks and special costumes. They want to look like skeletons and ghosts.

Then they go from house to house and say “ Trick or treat! “. People give them candies, cookies or fruit. When people give nothing, the children sometimes play tricks on them.

3. Why did people keep the day of Halloween ?

7. What do people give the children when they go from house to house ? 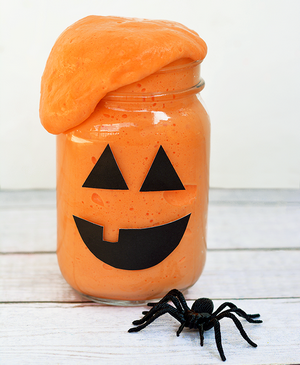 This is a fun and easy slime to make. Make it with white glue for opaque slime, or glue gel for translucent slime.

The glue has an ingredient called polyvinyl acetate, which is a liquid polymer. The borax links the polyvinyl acetate molecules to each other, creating one large, flexible polymer. This kind of slime will get stiffer and more like putty the more you play with it.

Store it in a plastic bag in the fridge, to keep it from growing mold.